Unless you have retreated to a rural cabin to focus on pottery, it is impossible in every day life not to feel bombarded by the unrelenting foot soldiers of the extreme Left, aka, the mainstream media. But something incredible happened recently in Pittsburgh, in a state President Donald Trump won against all odds by picking up 20 electoral votes on an historic evening in November 2016.

The Pittsburgh Post-Gazette hired a new editor. He observed that the newspaper’s political cartoonist, Rob Rogers, was obsessed with anti-Trump cartoons, including several that simply ignored reality. Rogers was fired in June. The Left’s collective head exploded. He’s a Pulitzer Prize winner! This is a travesty! 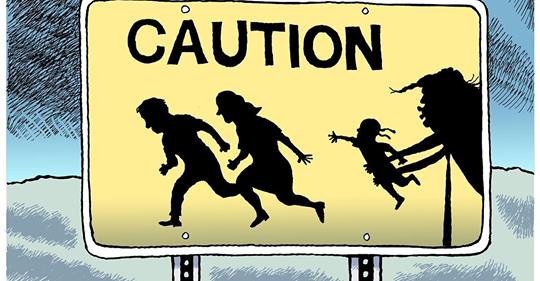 Naturally, the extreme Left was outraged by the rejection of cartoons such as this one (above), that grossly mis-portrayed the Trump administration’s enforcement of existing immigration laws at the southern U.S. border. In short order, a George Washington University apparatchik arranged an exhibit of Rogers’ never-published cartoons in the Corcoran School of Arts and Design beginning July 18.

Post-Gazette editorial page editor Keith Burris, who fired Rogers, should be saluted for carrying out what used to be known as “doing your job.” He demonstrated a steely will to honor his profession, dying though it may be. Newspapers that are agenda-driven are not delivering news and when their opinion pages are entirely invested in Trump-hating vitriol, that’s a departure from journalistic standards, too. (Go back and review the work of Washington Post legendary cartoonist Herb Block).

Those who choose to visit the Corcoran exhibit will have the advantage of finding a D.C. tourist destination with no line, no waiting.

Meanwhile, there are other political cartoonists who are paying close attention to what actually is happening during the countdown to the November mid-terms.

One thought on “Pittsburgh steel”